Over the years I have seen too many ZRX’s go down…and 50 to 3000 miles later, they may end up with a “Ventilated Crankcase” when a connecting rod tries to escape.

Why? you ask. Simple…when a motor is on it’s side, the oil pickup is out of the oil pool. ZRXs commonly continue running when they are on their side and no oil in the pickup means no oil pressure. The rod and main bearings get damaged. Sometimes slightly, sometimes really bad. When this happens, it does not “heal” and continues an accelerated wear pattern. Sometimes it is just a small rattle and with earplugs you do not hear it until it’s too late.

If a bike has been repaired by insurance and you countersign the final repair check, their liability ends, and if 2000 miles later you throw a rod, it is your problem.

You all say “I’ll just hit the kill switch” Right, dazed and confused and you are going to scramble over and hit a little button. Last time I went down I was busy holding my hand onto my shattered arm. Or, you say “I’ve NEVER been down”…kool, but the shop that works on your bike might and then they’ll quickly repair the damage before you find out. Don’t laugh, it has happened MANY times in my years at motorcycle dealerships.

You do not need to be an AMA Professional to benefit from the protection a KWICK KILL TipOver Switch affords. All current fuel injected bikes already have a similar setup.

Over one year of research and development has gone into its creation. As you all know, a ZRX running on its side has little or no oil running through its veins. A KWICK KILL is cheap insurance to protect your motor in high or low speed tipovers. Ask anyone whose motor has had rod and/or main bearing issues after a tipover how much they spent to repair the damage…it is in the thousands.

The function of the KWICK KILL is to turn off the ignition circuit when ALL of the following four conditions are met:
1) The bike is at a lean angle greater than 65 degrees
2) The bike is stationary
3) The clutch is released
4) The bike is in any gear except neutral

The angle sensor I employ is used on all late model Yamaha fuel injected bikes  (R1, R6 and FJR1300 etc.) The trick part is the logic circuit that was designed by Sean Stasiak (of Xbox Fame). This circuit is assembled and soldered by me, personally, and is tested for function in three separate stages of production. The unit has a six month warrantee against defects (poor wrenchin’ is not a defect of the KWICK KILL tipover switch 🙂

There are two connections to your bike you need to make to install the KWICK KILL, and they are both simple plug-in connectors. No wire stripping is required! 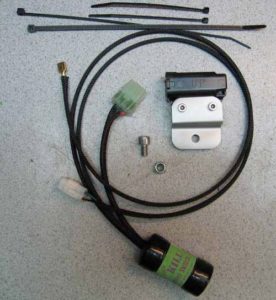 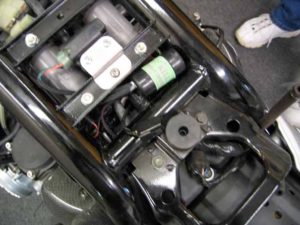 The KWICK KILL is an easy to install, “Plug n’ Play” unit. Once you have the fuel tank off, installation takes 5 to 10 minutes and requires zero special skills.

The KWICK KILL is offered subject to your acceptance of these three items:

1) The kickstand switch will be DISABLED

2) The KWICK KILL is “For Offroad Use Only”

3) You have basic knowledge of your bike, including how to remove and reinstall the fuel tank. Consult your shop manual for details.

Sorry, the KWICK Kill has been discontinued 🙂