For Off-Road Use Only 🙂 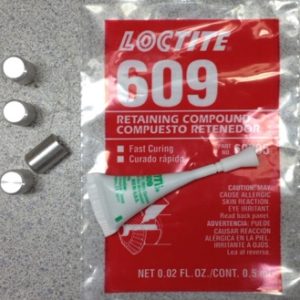 As we know, the ZRX, and virtually all Kaw Street Bikes, have a “Pulse Secondary Air Injection (PAIR) System to lessen exhaust emissions. This system works just like the air pump system on older cars…my 1969 Camaro had this. The difference is the PAIR system uses no horsepower to operate it, it works off intake vacuum and a diaphragm pump. There is no power to be gained by making it inoperable, but, with an aftermarket exhaust, the racket it causes on deceleration is pretty loud. Air being pumped into unburned exhaust causes it to burn.

Disabling your PAIR system is for Off-Road use only.

There, said it. Most of you have purchased block off plates from Greg Couch, Ivan’s or Muzzy’s already.

Tom Smith, aka KillerKaw, posted the following pictures on the ZRXOA to explain how the oil from your engine gets into your exhaust.  Air goes out the exhaust port and past the PAIR port in blue: 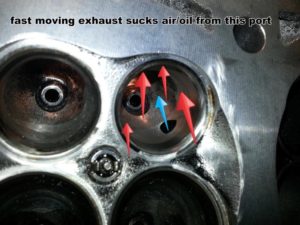 The dowel pin is sealed by a very thin o-ring on the valve cover spark plug seal. Most owners do not replace the valve cover gaasket set when doing service and this delicate o-ring does not always seal like it should. Because the PAIR system has a block off plate in the valve cover, and a header equipped bike generates a lot of suction, the o-ring lets air and oil thru from under the valvecover. Anyone who’s ever seen a Lexan pulser cover on a ZRX at speed knows how MUCH oil is in the valve train area at speed. A bunch! The oil gets sucked into the past the o-ring and out the exhaust. You rarely see it as blue smoke as it’s after the combustion process, but riding behind you can often smell it.

Top view of the dowel pins the No’Flo! plus will replace: 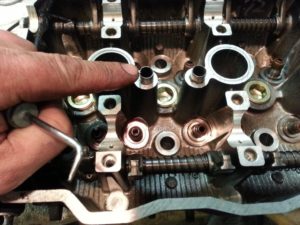 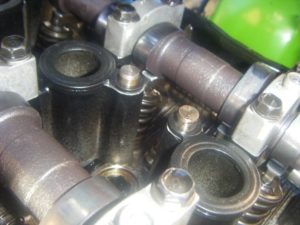 These are very easy to install. With the valvecover off, a pair of ViceGrip pliers will remove the dowel pins. They are a little hard to get out, sometimes needle ones will work better, but they will come out.

Next, spray some brake cleaner down the holes to remove the oil where the dowel pins were seated…don’t have anything or anyone behind the bike when you start it later, the brake clean may go out the exhaust. You can even use a Q-Tip if you like. Just clean the first 10mm or so where the plugs will seat.

Shake the heck out of the tube of LocTite 609 included…then, shake it some more. Open and apply around the hole, and on the No’Flo! plug, push in with the beveled side up, lather, rinse repeat x4 🙂 They will pretty much drop in place with zero effort. The LocTite will do the magic. Let set for an hour, then wipe off excess LocTite that will not have hardened…it only hardens in absence  of air. Install gaskets and reassemble as per the shop manual.

This also includes a tube of LocTite 609

With the purchase of a Valve Cover Gasket “Set”, No’Flo!s are free.